In this interview, Paul Mathuri, Head of Cultural Inventory for Art and Heritage, explains how the town of Angles is laid out and the individual details of some of the houses.


To properly understand the village centre of Angles-sur-l’Anglin, it is necessary to know that the urban area is split into two parts: an upper town and a lower town, which is level with the right bank. The upper town is found on the rocky limestone overhang and the lower town is level with the bridge. On the left bank of the Anglin river, there is a neighbourhood that was based around the old Sainte-Croix abbey. Where we are currently is where the markets would have been.
Imagine that behind me there are halls where people would display their goods. It was the economic heart of the village. All of the main streets in the village centre stretch out from this triangular spot at the centre of Angles-sur-l’Anglin village. This part of the village was surrounded by a rampart. There was a fortification surrounding the entire urban area of the right bank that was punctuated by several gates, the names of which were found in the archives. For example, there was the Saint-Lazare gate in the north, the Blancoise gate to the east and the Gimont gate to the south, towards the bridge. Outside the rampart, there were also neighbourhoods that took the name of the closest gate, meaning there was a Saint-Lazare neighbourhood, a Blancoise neighbourhood, etc.
The left bank had a neighbourhood around the old Sainte-Croix abbey, but unlike the right bank, this part was not protected by a fortification.
The type of material used in Angles is found in all kinds of construction – limestone. It is a rather specific kind of limestone that is somewhat different to that found in the surrounding villages since it is a particularly hard stone that is resistant to dampness and bad weather. This makes it very interesting for construction, but also more difficult to cut. The special feature of this stone from Angles is that it has a slightly different hue to the limestone from the surrounding area, which tends to be more white and chalky. Here the limestone is more of a white/off-white. With regard to the roofs, they had flat tiles for the most part, which were produced locally here in Angles.

With regard to architecture, the majority of houses in Angles-sur-l’Anglin were either converted or completely rebuilt in the 19th century, but the village centre still has some examples of houses that are even older. These are mainly houses with gables that overlook the street and that date back to the medieval period, having been in use until the start of the 16th century. There are houses that are even older still, known as “balet” houses. These are houses with a canopy that protects an exterior set of stairs. 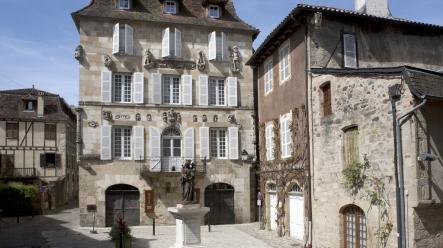 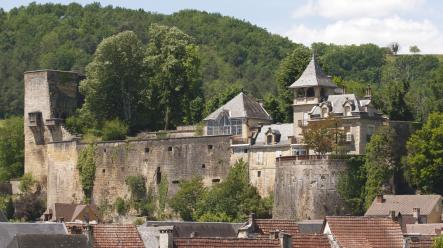