The chapel is all that remains of the old Sainte Croix or Holy Cross Abbey, which occupied a large portion of this quarter. You can see what the abbey used to look like thanks to the animated reconstruction in this video.

The chapel lying below the castle on the left bank of the river Anglin is all that remains of the old abbey church of Sainte Croix d'Angles. These images depict the group of monastic buildings as they would have looked in the 15th century.
The abbey was founded in 1040 by Isambert, Bishop of Poitiers, and Lord of Angles. In 1088, Hugh VI of Lusignan moved the Benedictine monks of the abbey of Saint-Cyprien Poitiers to the abbey, however Pope Urbain II in turn bestowed the abbey on the Cannons Regular of the Order of Saint Augustin.
Construction of the abbey’s church began in 1175 and it was consecrated in 1192. It was originally 60 metres in length with a transept and a chancel with an apse and two apsidioles extending out from its vault rib nave. The monastery buildings, which housed the monks, were set out on either side of a square courtyard, between the church and the river Anglin.
Although initially prosperous, the abbey fell into decline from the 15th century. It sustained damage during the religious wars of the 16th century. The monks' quarters were sold to the Revolution as a national asset and were subsequently turned into private houses. Little by little the church fell into ruin, and the spire and chancel eventually collapsed.
In around 1840, the local council built a bridge over the river Anglin and a new road was laid cutting through the heart of the abbey and where the ruined chancel and church had once stood. Only the first span of the nave remained, serving as a chapel and offices for parishioners of the left bank of the river Anglin.
From the other side of the road, you can still make out the gable wall of the north transept, which now serves as a party wall between two houses.
Preserved on the church's facade is the striking Gothic arched portico flanked by two blind arcades. Despite the clumsy restoration of the tympanum in the 17th century, the abbey was granted Historical Monument status in 1926. 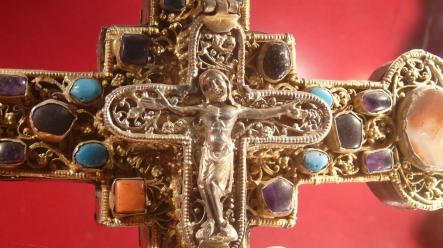 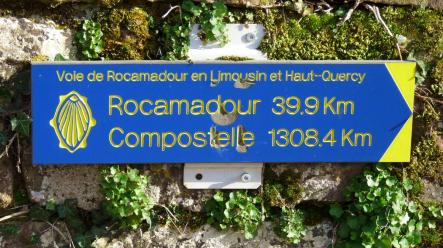 The Bénévent-Rocamadour route
Thematic
Religious heritage
See all the steps